Batman, The Dark Knight, The Caped Crusader, all names that resonate with men, women, and children alike. 75 years ago, Bob Kane gave the world one of the most enduring, most inspiring, and all around one of the greatest comic book characters in the history of comic books. Warner Bros. and DC Comics has many great things in store for Bat fans throughout the year; but Royal Collectibles is your one stop hub for all great and unique Batman memorabilia. 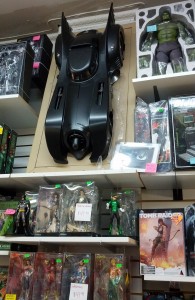 Check out our 1/6 Scale Batmobile by Hot Toys! Can fit a 12″ Batman figure inside!

Located in our very own Batcave, you will find some of the best Batman action figures that have ever graced store shelves. Kenner’s “Batman Returns”, “Batman Forever”, “Batman: The Animated Series”, and other Batman products reflecting the comics, cartoons, and films. Most of the figures and toys produced for “Batman: The Animated Series” have become very collectible over the past years as Paul Dini and Bruce Timm’s work have become more recognized and prolific for giving fans and non fans what many people feel is the definitive take on The Dark Knight. 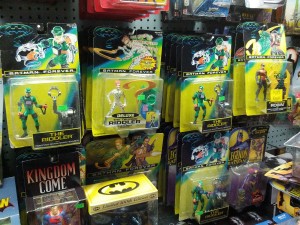 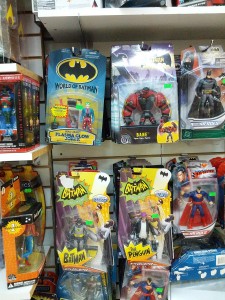 Action figures and toys based on these beloved designs are getting harder to come by. My recommendation: get them quicker than Batman gets to the top of the GCPD at the first sight of the Bat signal. They are all reasonably priced and will be excellent additions to your collection, or just great pieces to have to commemorate an icon.

If you’re on the market for more current Bat related items, DC Collectibles has been producing a fine assortment of Black & White Batman statues. What makes each statue truly special is that they are designed by artists who have left their personal stamp on the Batman. Be it Jim Lee, Greg Capullo, or even a Batman sculpt based on the design of the hit “Arkham City/ Arkham Origins” costume, you’ll find it. As an owner of one myself, I must say that they are really beautiful. For someone just getting into collectibles, or for someone that just wants a nice keepsake piece reflecting their favorite Batman, this line of statues is a perfect starting point. You are bound to find a design that resonates with your tastes and you will not be disappointed with the quality in which these have been made! 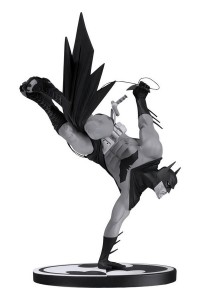 There are so many more Batman products that I could think of, but how about you stop by the store and see for yourself what we have. I promise you won’t leave empty handed. After all, maybe you’re on the market for Superman instead.